A feature of chronic neuromuscular pathology is the absence or insufficient reflex relaxation of the lower esophageal sphincter. As a result of the changes, the stable patency of the esophagus is disturbed, its part narrows in front of the entrance to the stomach, and the upper sections expand. Therapeutic measures in the presence of a diagnosis of esophageal achalasia are represented not only by drug treatment (the effectiveness is proven at stage 1), but also by special endoscopic techniques, surgical intervention. Moreover, all operations for esophageal achalasia are an extreme measure. The specialists of the “Certus” clinic will conduct an examination using the latest diagnostic equipment and prescribe the necessary therapy.

Esophageal achalasia, which is treated with medication, requires the use of drugs from the group of nitrates, as well as special blockers. With the help of isosorbidum, nitrosorbidum, nifedipinum, contractions performed by the smooth muscular system are blocked, which stimulates release.

Treatment with phosphodiesterase inhibitors (sildenafil) is characterized by good performance in the diagnosis of esophageal achalasia. The mechanism of this drugs category is characterized by the acceleration of the release of nitric oxide, which plays a key role in the processes of relaxation and lowering pressure indicators.

This option has not only a high diagnostic value, but also a proven therapeutic efficacy, represented by:

Endoscopic injection of botulinum toxin successfully blocks the release of acetylcholine, thereby allowing passive mechanisms to facilitate rapid emptying of the esophagus. The indications are: cases of esophageal achalasia 1 or 2 degrees in the history.

The result of inhibition of the acetylcholine release is relaxation of smooth muscles with the introduction of 1 ml of the drug, or 240 units of the active substance. Under local anesthesia, esophagoscopy is performed, after which 60 ml of the drug is injected 4 times (by injection). A puncture of the mucosa facilitates the entry of the drug into the lower esophageal sphincter. The reference points are the full correspondences of 3, 6, 9 and 12 o’clock of the dial (visually). The duration of an unstable remission, as practice shows, is no more than 12 months, which implies a lifelong repeated injections of botulinum toxin. 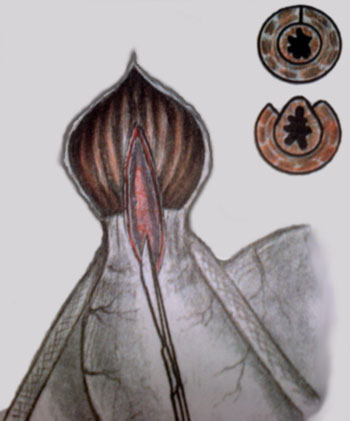 The indications are: esophageal achalasia of the 2 or 3 degrees in the history. Contraindications are: the patient’s serious condition, significant varicose veins in the esophagus, as well as ulcerative and ulcerative-hemorrhagic esophagitis, blood pathologies with a high risk of bleeding, febrile conditions.

The procedure involves a study to diagnose and remove accumulated secretions from the gastric cavity and esophagus, which significantly reduces the probability of aspiration. The insertion of the guidewire through the endoscopic instrumental channel under conditions of visual control of the situation is carried out in the antrum of the gastric section, where it remains until the endoscope is removed. The guidewire allows the dilator to be inserted correctly with the balloon placed according to the position of the esophageal diaphragmatic opening.

Inflation of the dilator balloon is carried out gradually, until the appearance of a distinctive compression in the area where it touches the lower esophageal sphincter, very often called the “waist” in the central balloon part. It is imperative that the balloon is positioned as accurately as possible to ensure maximum success of the surgical procedure. Currently, the dilation process is carried only step by step, using several balloons with a diameter of 30 to 40 mm.

This technique shows a positive dynamic in about 75% of cases, but the probability of the developing gastroesophageal reflux disease, in the form of inflammation of the walls of the lower esophagus, is quite high (about 25%). Among other things, in 5% of cases, perforation (violation of the integrity of all layers) of the esophagus is observed. To diagnose this complication in the treatment of a condition such as esophageal achalasia allows the use of a small amount of contrast agent dissolved in water.

In the presence of an established diagnosis of esophageal achalasia, surgery in the form of an intervention with bloodless technique involves a phased operation:

Indications for surgical intervention with the use of oral endoscopic myotomy are: the presence in the patient’s history of grade 3 or 4 esophageal achalasia.

In the modern world, surgical methods of therapy can be classified as highly effective and economically viable. From this point of view, the minimum number of relapses plays a great role.

The indications are: the lack of proper effectiveness of previously used in the treatment of therapeutic drug regimens and endoscopic methods, including balloon dilation and the injection of botulinum toxin.

In practice, surgical intervention can be represented by:

The first option involves a strictly phased implementation with the intersection of the lig.gepatogastricum, isolation of the anterior esophageal wall, diaphragmatic pedicle, posterior esophageal wall, after which it is necessary to dissect the muscle layer in the esophagus (70-90 mm) and in the stomach, maintaining a distance of about 20 mm below the esophagus … The general indicators of the length of myotomy in this case are 60-80 mm. The method is complemented by fundoplication, which prevents the development of such complications as gastroesophageal reflux.

A Toupet fundoplication is the formation of a symmetrical cuff type (anterior and posterior walls of the fundic gastric region) to envelop the esophagus 270 degrees and release the anterior right surface.

The specialists of the “Certus” clinic are ready to provide competent advice on the choice of the most effective and safe method of getting rid of esophageal achalasia. In the medical center, surgical intervention is performed using modern equipment and the most effective techniques.

Thanks to modern invasive methods, the natural passage of food is fully restored, the patient’s quality of life is improved, the cause of the pathology is eliminated and a complete recovery is achieved. The average duration of surgical intervention does not exceed 3 hours in the context of reducing the period of inpatient postoperative follow-up to 24 hours.

1. PCR test for COVID-19.
2. General blood and urine tests.
3. Blood test for sugar.
4. Blood type and Rh factor.
5. Coagulogram (blood coagulation).
6. Biochemical blood test.
7. Blood test for the Australian antigen, hepatitis “C”, HIV.
8. The reaction of Wasserman.
9. Electrocardiogram.
10. The conclusion of the therapist.
11. Certificate of fluorography.
12. Ultrasound of the abdomen.
13. Esophagogastroduodenoscopy.
14. For women – a certificate from a gynecologist.